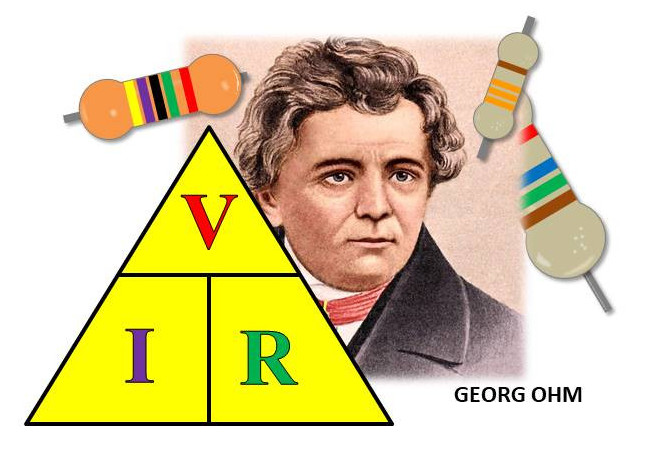 Ohm’s Law is one of the most important formulas in the electrical engineering world. It was formulated by a German Scientist, Georg Ohm, in the early 1800’s He was carrying out experiments with the new electrical cells invented by the Frenchman Voltaire. He discovered that there was a direct relationship between the voltage in a circuit, the resistance of the circuit and the current that flows around the circuit.

Ohm’s law states that the VOLTAGE between two points in a circuit is directly proportional to both the CURRENT passing through the resistance and to the actual value of the RESISTANCE of the circuit.

In other words Voltage is equal to the Current multiplied by the Resistance. 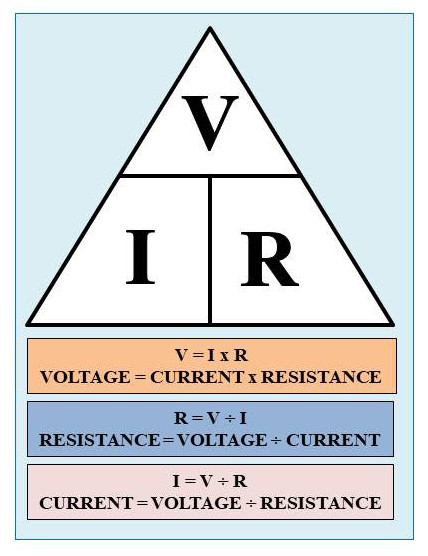 We can arrange Ohm’s law into the very useful and user friendly Ohm’s Law Triangle. This is drawn as a triangle with three sections, one on the top and two on the bottom. In the top part we have the voltage; with the current and resistance occupying the bottom two spaces. This format is a visual reminder of the various calculations that we can perform and we will look at these shortly.

To begin with, let us consider each of the three variables being used.

These are the voltage, the current and the resistance. 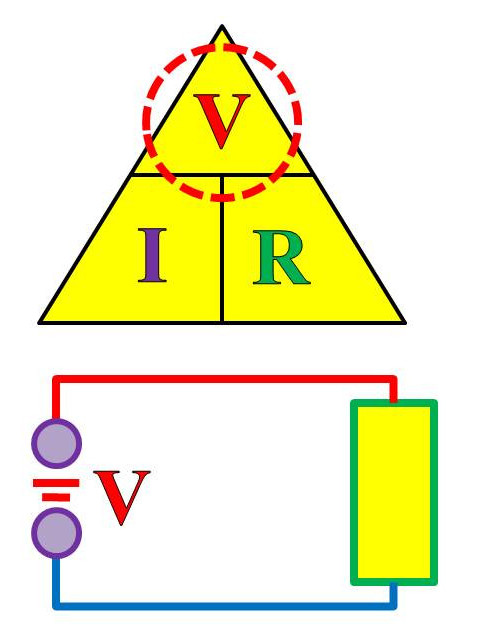 This is sometimes called the potential difference, put simply it is the driving force that can push the electrons around a circuit. No voltage, no current flow.

Voltage can be direct current as in a car battery for example or it can be alternating current as you would find in a domestic property.

V for Voltage appears in the top space of our triangle and below the triangle we have shown how voltage might be shown on schematic drawings. In this case we have shown a direct current circuit. 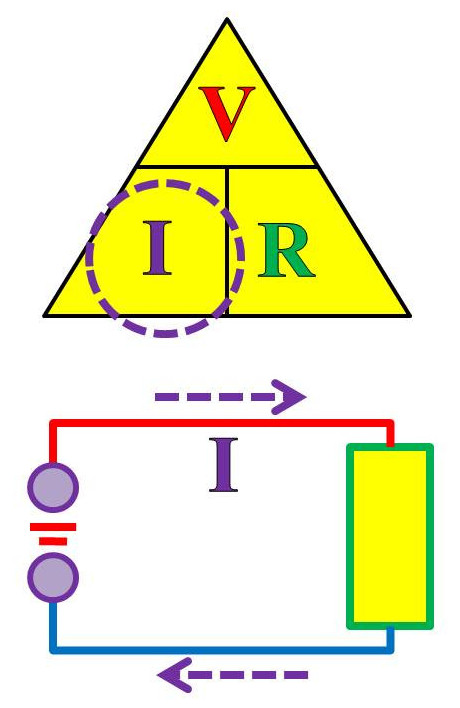 The next symbol is the capital letter I, sometimes shown as an A. This is a measure of the quantity of electrons flowing around a circuit. It is a combination of the voltage and current in a circuit that gives us electrical power, the ability of equipment to do work for us or light up a spotlight, boil a kettle of water and so on.

An often asked question – if it is Amps, then using the letter A makes sense but not the letter I. How does that work?

This goes back to the early 1800’s again, and the French physicist Andre Ampere. He did extensive research on electromagnetism and discovered the relationship of currents flowing around a circuit to other circuit parameters. The Amp was named after Ampere, but the letter I, where does this come from? During his lifetime it was not called an Amp, instead Andre Ampere himself referred to current flow as the INTENSITY of current and used the letter I as the symbol for intensity. Whether you use A or I is a personal choice, they both mean current. 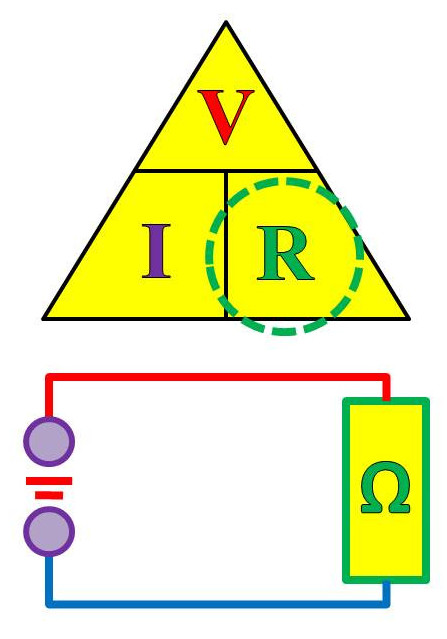 And finally to the resistance. This variable uses the omega symbol – Ω – or more recently the letter R for resistance. Either symbol – Ω or R – is acceptable.

The resistance is an indication of how difficult it is for electrons to flow around a circuit.

The greater the resistance, the more the flow of electrons is impeded or reduced and therefore there is less current flow.

At normal room temperatures, everything has a resistance to the flow of electrons or current. The resistance of copper wire is very low and as a result copper cables make very good conductors; whereas a ceramic insulator on an electricity pylon has a very high resistance, they can hold back many thousands of volts and the current flow is effectively zero. 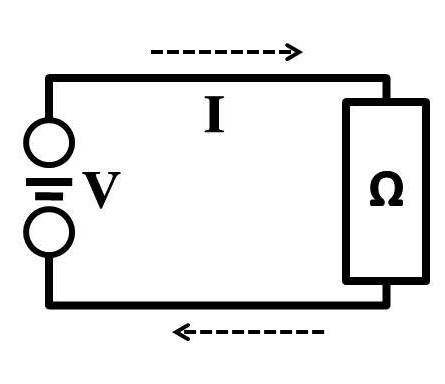 Here we have shown all three parameters on the same drawing. When working on electrical circuits try to imagine the circuit as being basically like this.

There will be a source voltage, and circuit resistances, components and appliances that are connected to the circuit, there will be wiring that inter-connects all the parts and if the circuit is continuous then current will flow around the circuit and, hopefully, make things happen.

WHAT GOES UP MUST COME DOWN 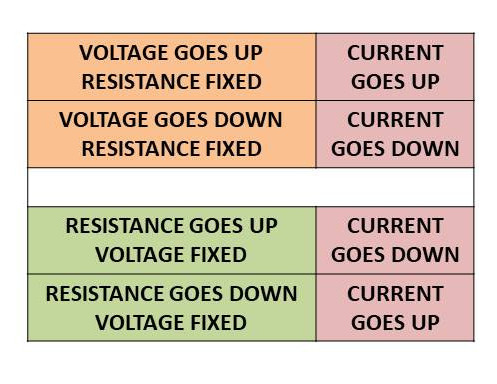 Any change in any of the variables will cause a change to one or more of the other variables – in theory. Let’s explain.

Any change in current can only be as a result of the voltage or resistance changing, it can never change on its own. Something has to happen first before the current changes. 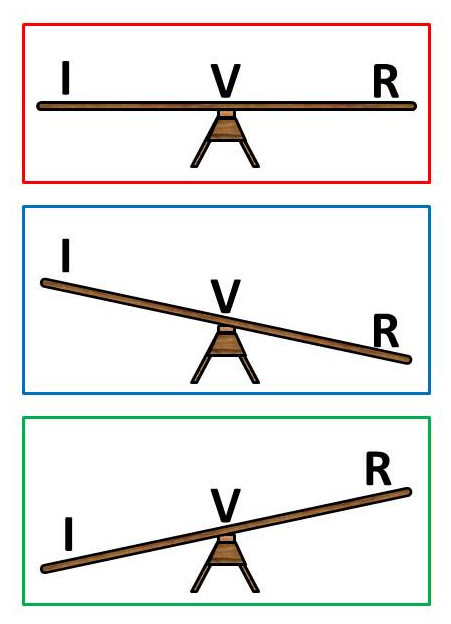 In the UK, the voltage is fixed, so only the resistance of the circuit can change and this is achieved by switching lights on or off, by turning the kettle on, by taking a shower etc. As a result, the current used will change and we can visualise this best by thinking of the circuit as a see-saw.

We can start off with the see saw balanced, let’s say there is some resistance in the circuit and that there is also some current flowing around the circuit.

In the second drawing, the resistance has gone down, so the opposite side of the see-saw MUST go up.

RESISTANCE DOWN, CURRENT UP

The third drawing shows the resistance increasing, the resistance side of the see-saw has gone up, in which case the opposite side, the current, must go down. RESISTANCE UP, CURRENT DOWN

AN EXAMPLE FOR CURRENT 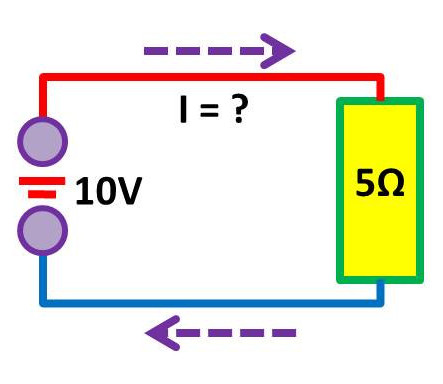 We will move on now to some examples and calculate the answers using the Ohm’s law triangle. There are lots of methods in use and here at Learn Electrics we find the following method is very easy to use and we use this method ourselves.

Here is a circuit. We are told that 10 volts is applied to this circuit with 5 ohms of resistance. We need to calculate the current flowing around the circuit. 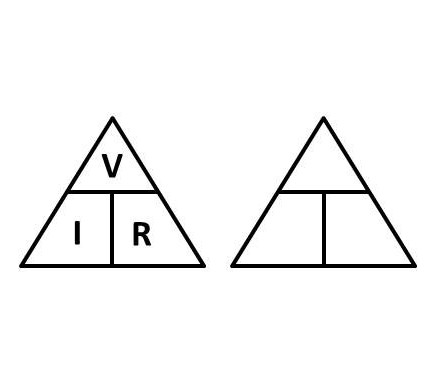 So … begin by drawing the Ohm’s law triangle with the letters written in, and then draw another “empty” triangle next to the first one.

Now fill in the information that you know. 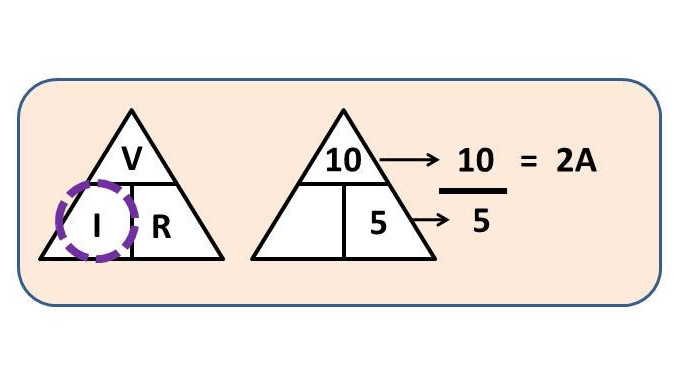 5 ohms resistance on the bottom

Now, bring these two numbers to the side and keep them in the same position, 10 on the top and 5 on the bottom.

What have we got? With 10 over 5 we have a division calculation.

10 divided by five will give 2 amps of current.

A SECOND EXAMPLE – THE RESISTANCE 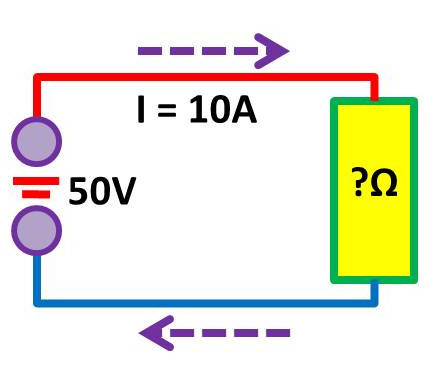 Let’s try this one now.

Here is the circuit and we can see that we have a voltage of 50 volts, a current of 10 amps and we need to calculate the resistance.

Let us draw our two triangles and enter the numbers that we know. 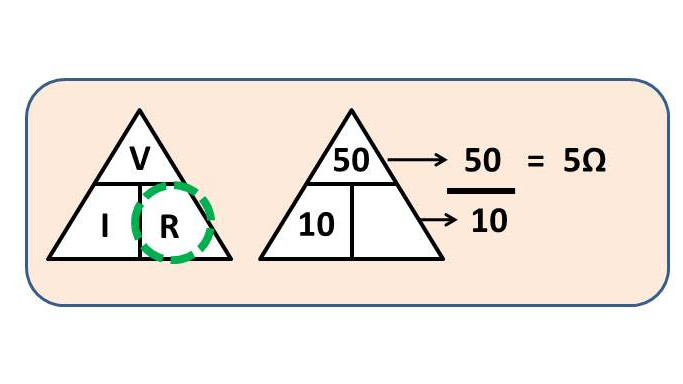 And 10 amps on the bottom

A FINAL CALCULATION – THE VOLTAGE 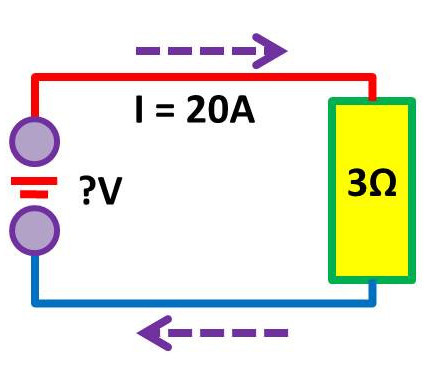 This circuit shows that 20 amps of current is flowing through a resistance of 3 ohms. We are asked to calculate the voltage of the circuit. 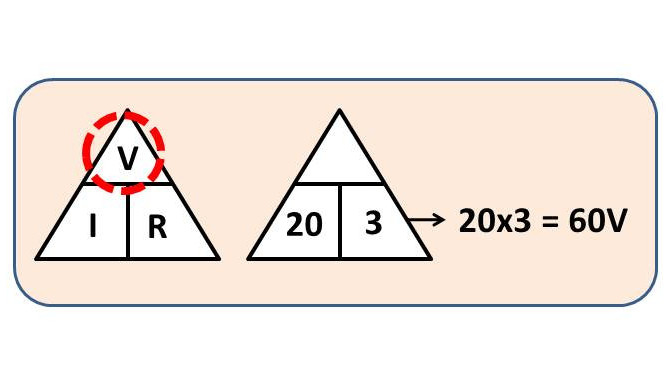 Again, draw the triangles and enter the data that we already know.

20 on the bottom row for current

And 3 for resistance, also on the bottom row

This time, both known quantities are on the bottom row so the answer cannot be found by division.

It must be by multiplication. 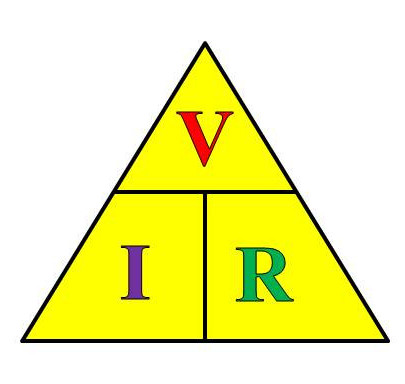 If you know two of the variables then you can use the Ohm’s Law triangle to calculate the third.

The position of the numbers, when entered into the triangle will indicate the calculation to be performed. A top over bottom number will signify a division operation; whilst side by side numbers will require a multiplication.

Changes in voltage or resistance will alter the current.

Current changes are the result of something else changing first.

We hope that you enjoyed this article on Ohm’s law.

Good luck, practice really is the key to becoming good at calculations.

Type in   LearnElectrics   all one word, into the YouTube search bar and you will have access to all of our videos on many electrical topics.

and it can be easily found using the following link …

Many thanks for visiting LearnElectrics.com