Many trades and occupations now ask that some of their employees are tested for colour blindness. This is particularly important in the electrical and electronic trades where many different colours are used to identify cables. Some training centres will test a new trainee’s ability to differentiate colours when they first begin their training. This can and does have advantages, it is better to know that a potential problem exists before someone invests a lot of time and money into training for a trade if they cannot then practice that trade because of a pre-existing condition.

WHY HAVE COLOUR TESTS

Everyone’s eyes are slightly different in the way that they analyse the light that enters the eye. The back of the eye is made up of millions of tiny colour receptors that interpret the colours in the light that falls onto them. In most people, the ability to separate the colours is fairly consistent but in a very small minority, certain frequencies of light are not easily distinguished by all the sensors. Some groups of sensors cannot accurately differentiate between certain colours.

In some people this is a very insignificant problem and is hardly noticeable and the sufferer may not even be aware that they have a problem and it probably isn’t a problem to them anyway.

However, in a very small percentage of the population it can be a worrying issue depending on their occupation and lifestyle. It matters that an electrician can distinguish between cable colours. But having said that, in over forty years of working in the electrical and electronic trades I have only ever once come across someone who was totally colour blind. Fortunately it was discovered on his first day of training, by using testing techniques as shown here, and he was able to transfer to a non-electrical trade where his deficiency was not a problem.

Other occupations are colour distinction critical. People working in the airline industry or air force may have an absolute need to be able to differentiate colours and details correctly every time. A mechanic working on an aircraft must be able to do his job correctly every time, there are no lay-bys in the sky and a pilot must be able to see the colours of the various lights in his or her cockpit. The last thing you want is the engines being turned off at 36,000 feet because they got the colours mixed up.

This article must not be assumed to be a replacement for proper testing. The purpose of this article is to give you an insight into why we test for colour deficiencies and how the testing is carried out. Please treat the examples shown here as just for fun. There can be no substitute for having the tests carried out in a controlled manner and by competent persons that can interpret the results of the testing accurately. So, please, treat this as a very brief overview and the examples as just that, examples. We are simply showing you what to expect if you are asked to take a test by a college or employer. If you feel you have a problem, you may want to seek the advice of a specialist. We are not experts.

WHAT HAPPENS IN THE TEST

The tests themselves are composed of an image made up of coloured circles of varying colour and varying size and hue. They are arranged in such a manner that problem colours will appear next to each other in predetermined patterns. 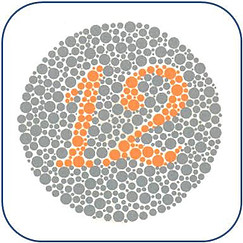 The different colours will be placed so that they make up for instance a number 3 to a normal eye. But because some of the problem colours are mixed into the number 3, then for a very small percentage of people it will look like a number 8. Or it may be a number 1 that is interpreted as a number 7 and so on.

The test should begin with an explanation of what the tester wants you to do, making you feel at ease and comfortable. Sometimes there is a time limit for identifying each colour and this will be explained too, normally you will have around 5 seconds per test image.

The image itself is often a circle and will be made up of hundreds of coloured dots and very small circles in an apparently random manner. Your task is to identify the number in the centre of the image disc. The test will usually begin with a fairly easy number to identify and then move towards more complex and difficult images. 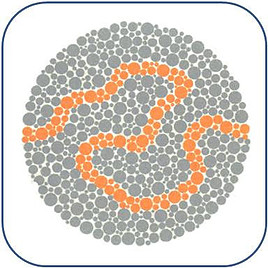 It is important that you say what you see as some images will contain no number at all. If you see no number then reply “no number” as that might actually be the correct answer.

For some images you may be asked to trace a path across the image.

In a professionally conducted test, under controlled conditions, the results can be professionally analysed and often a level of colour deficiency will be given. There are different levels of deficiency ranging from slight impairment to severe and some trades will accept certain levels for certain occupations.

For some tests you may be asked to write down the number on an answer sheet; in others you may be sat opposite the tester and reply verbally.

We will show here a series of sample images in which a number is shown. Please identify the number and write down the answer. You can compare your answer to the correct answer at the end of this paper. Remember it is just for fun, this is not being conducted under supervised conditions.

Allow yourself five seconds per example.

The following six examples are all numbers 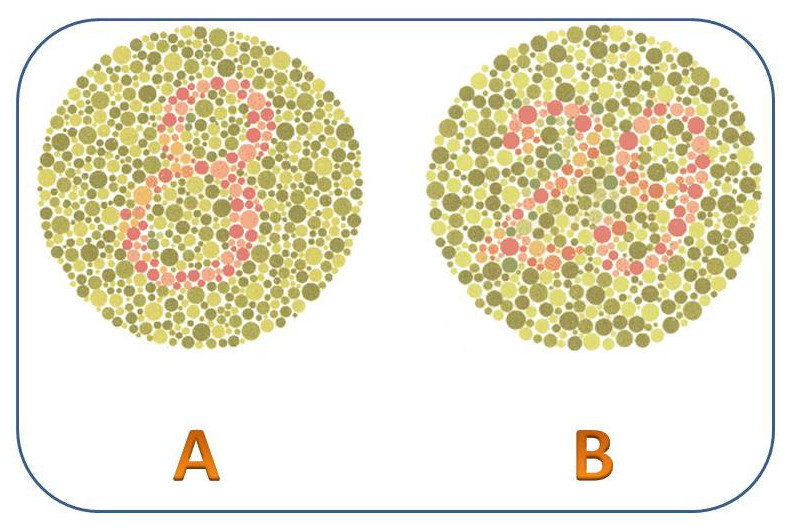 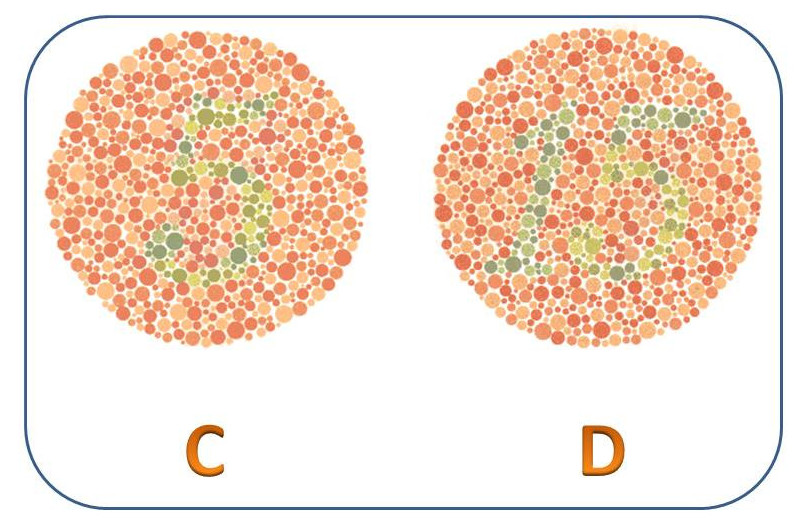 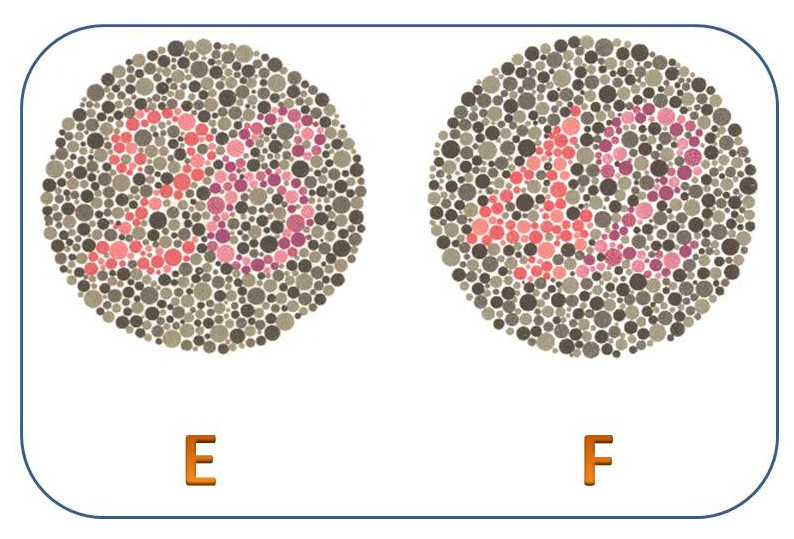 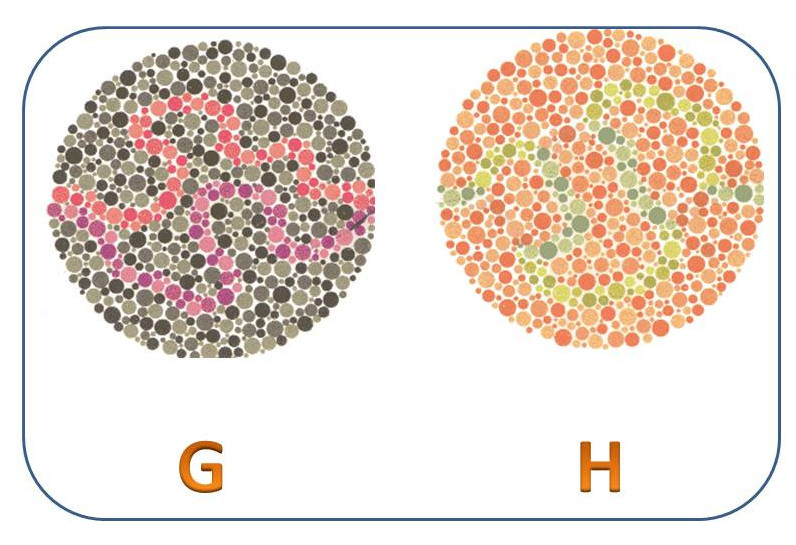 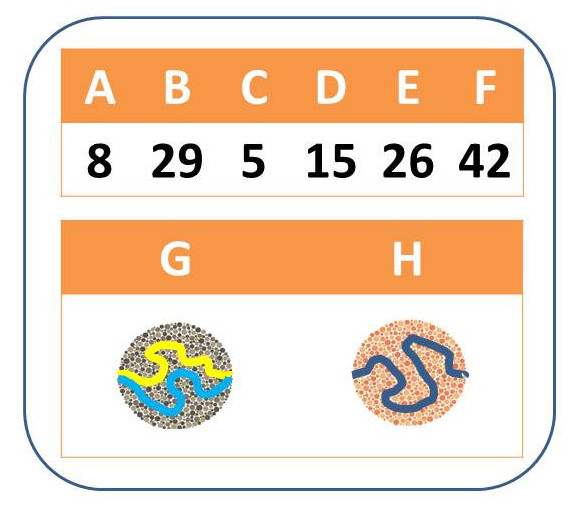 We hope you enjoyed having a go at our examples, taken from the Ishihara range of tests, and that you have learnt a little about colour blindness testing.

We have a companion video on You Tube which you may wish to look at.

To view all of our YouTube videos, type in    LearnElectrics all one word into the YouTube search bar.